When does winter really end?

Posted on April 8, 2019 by WeatherGuys Editor 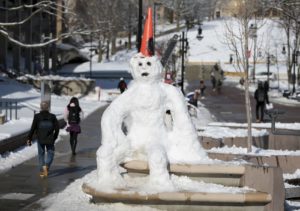 Last year’s 7 inches of snow on April 18 provided vivid evidence that, though early April often brings the first string of nice spring days to southern Wisconsin, we are not truly out of the woods until the end of the month.

Despite the possibility of such an outlier event, recent research at UW-Madison has considered the variability of the end of winter based purely on temperatures above the surface.

Specifically, we have considered the areal extent of air colder than 23 degrees at about 1 mile above the surface over the Great Lakes states.

We use the average areal extent of such air in the region, over the last 70 winters (December, January and February), as a threshold by which to consider the end of winter.

Any day in March or April of any year on which that day’s areal extent of cold air exceeds the 70-year December-January-February average is deemed a “qualifying cold day.” The last day of the last three-day or longer streak of such “qualifying cold days” in a given winter season is considered the end of winter.

Though the end of winter defined this way is highly variable from one year to the next — and bears absolutely no relation to how severe or mild the preceding months of that winter have been — over the last seven decades the average end of winter has become earlier by just over one week in our region.

This regional trend is consistent with the overall global trend of slight warming but, as we all no doubt remember well, does not preserve us from the occasional late-in-the-season reminder that winter leaves only grudgingly.

Comments Off on When does winter really end?