How did 2019 weather align with climate trends?

Posted on January 22, 2020 by WeatherGuys Editor

The average annual temperature for the contiguous U.S., which doesn’t include Alaska or Hawaii, was 52.7, or 0.7 degrees above the 20th-century average. This ranked in the warmest third of the record and was the coldest year since 2014. Wisconsin’s annual average temperature ranked 46th in the record.

Also, 2019 saw the continued trend in the decline of Arctic sea ice extent. The average annual sea ice extent in the Arctic was approximately 3.94 million square miles, the second-smallest in the 1979-2019 record. This continues a trend of sea ice loss of about 18,000 square miles per year. That is more than a quarter of the size of Wisconsin.

Over the 41-year satellite record of sea ice coverage in December, the Arctic has lost about 734,000 square miles of ice — 11 times the size of Wisconsin. The extent of sea ice around the Antarctic was also the second-smallest annually averaged value on record.

Comments Off on How did 2019 weather align with climate trends?

What is a fire cloud?

Posted on January 21, 2020 by WeatherGuys Editor

With the raging fires in Australia, you may have heard news reports of pyrocumulus, or fire clouds.

In Latin, pyro means “fire” and cumulus means “pile up.” Cumulus is a type of cloud that is common in Wisconsin, particularly in summer. Cumulus clouds are those puffy white clouds with tops that have a cauliflower appearance.

Pyrocumulus clouds are grayish or brown in color because of the ashes and smoke of the fire. The tops of these clouds can reach as high as 30,000 feet. It is difficult to locate the bottom of a pyrocumulus cloud as it is often obscure by the ash generated by the fire or the volcanic eruption.

A pyrocumulus cloud forms from rising air that results from intense heating of the surface by phenomena such as wildfires or volcanic eruptions. The fires that generate these clouds can be man-made or natural. A big fire produces strong upward moving air currents that carry water vapor and ash upwards. The water vapor can condense on the ash forming cloud drops. The vigorous upward motions produce these pyrocumulus clouds that look similar to thunderstorm clouds, which also form due to strong upward moving air.

If lots of water vapor is available, the pyrocumulus can develop into a cumulonimbus, or thunderstorm. When a thundercloud forms, it is called pyrocumulonimbus. Like thunderstorms, pyrocumulonumbus can produce lightning because of the strong updrafts. Rain can also fall from these clouds, which could help extinguish the fire generating the cloud. Of course, the lightning might cause another fire.

There have also been reports of fire tornadoes in the recent Australian fires. A fire tornado is a swirl of fire that extends upward from a ground fire. They are also called fire whirls. These vortices can occur over a range of fire sizes, but the largest are associated with wildfires like those in Australia.

There is a wide range in the properties of a fire tornado, but they are usually 30 to 200 feet tall and about 10 feet wide. Generally, they last for only a few minutes. Fire tornadoes were reported during the famous Peshtigo Fire of October 1871.

Comments Off on What is a fire cloud?

Posted on January 6, 2020 by WeatherGuys Editor

Despite the slight touch of winter on its last morning, December 2019 was an unusually warm month both locally and hemispherically.

Here in Madison, the month averaged 7 degrees above normal, with the highest temperature of the month, 55, occurring on Christmas Day, just one degree shy of the all-time daily record.

Across the entire Northern Hemisphere, the areal extent of air colder than 23 degrees at approximately 1 mile above the ground was the smallest ever in the 72-year record. It is nearly impossible to say what this exceptionally warm month means for the rest of the winter, especially locally.

Any of us who have lived here long enough know that winter has a way of making its presence felt even when off to a slow start. No matter what happens next in southern Wisconsin, we have passed what is normally a hard-hitting winter month relatively unscathed.

Conversely, 1979-80 was, prior to this year, the second warmest December and yet ended up as only the 30th warmest December/January/February. Thus, though not a guarantee, it is very likely that this year the hemisphere will experience one of its five warmest winters in the past 72 years, yet another sign of the robustness of the gradual warming being observed in a number of other ways around the globe.

Comments Off on Was December’s unusual warmth widespread? 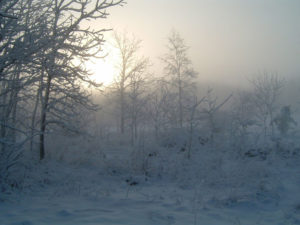 Why don’t the latest sunrise and earliest sunset match up with the winter solstice?

Posted on December 16, 2019 by WeatherGuys Editor

On that day we have our shortest day and longest night of the year in terms of daylight. It’s the astronomical moment when the sun reaches the Tropic of Capricorn.

If you take a picture of the sun each day when your watch says noon, the sun is not always in the same place in the sky. It moves east and west because of the variation in the length of the solar day, and it moves north and south with the change of the seasons. The combination of these motions traces out a figure-8 shape called the analemma, which is sometimes printed on globes.

Comments Off on Why don’t the latest sunrise and earliest sunset match up with the winter solstice?