Posted on June 4, 2018 by WeatherGuys Editor

No. Objects, even the atmosphere, will warm as long as the energy gains exceed the energy losses to their environment.

When the energy gains balance the energy losses, the object’s temperature remains constant. If the carbon dioxide levels were to suddenly remain constant, the atmosphere would continue to warm. 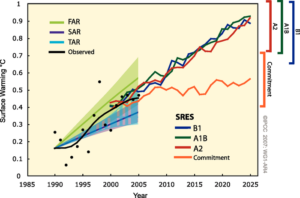 The orange line in this graph shows committed warming if greenhouse gases were held constant from the year 2000, the other lines show warming with continued fossil fuel use.

Climate models estimate that it will take about 40 more years for the temperature to stabilize at a temperature higher than today’s global mean temperature. This decades-long lag is due in part to the long time it takes to heat the oceans.

The energy increases due to higher carbon dioxide concentrations does more than warm the air, it heats the ocean. It takes more energy to raise the temperature of water than air. Once the ocean temperature is elevated, it will release heat back to the air, and be measured as surface warming.

Comments Off on If we stopped emitting carbon dioxide right now, would Earth stop warming?