Is this hot start to summer unusual? 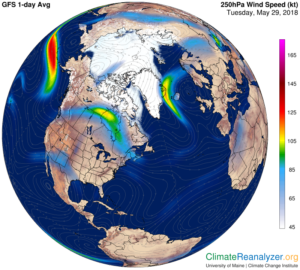 Beginning on Saturday, Madison has experienced two straight days in May at or above 90 degrees for the first time since 1991 and for only the third time in nearly the last half-century (the others were in 1975 and 1978).

What’s more, the forecast is for temperatures to soar into the mid-90s again Memorial Day and Tuesday which, if it happens, would be the first time since at least 1971 (and perhaps in its history) that Madison has had four consecutive May days at or above 90.

The underlying causes of this remarkable heat are circumstantial. First, and perhaps most importantly, the jet stream is well north of its normal position for this time of year. Currently located in central Canada, the jet is in a location more common for late July and August. Since the jet is tied to regions of large horizontal temperature contrast, its current position ensures that locations even as far north as Madison are on the warm, tropical side of the hemispheric flow.

In addition, a reasonably strong upper-level trough exists over southern California which has been promoting broad southerly and southwesterly air flow from the Desert Southwest to the High Plains. This has placed a wide expanse of exceptionally warm air just to our west and southwest, ensuring a prolonged period of very warm temperatures over the western Great Lakes states.

So, the warmth we are likely to continue experiencing for the next couple of days is quite unusual for this time of year. Such a warm start to our summer season does not, however, suggest anything at all about the remainder of the summer in terms of warmth. The circumstances of the hemispheric flow patterns that have conspired to create this heat wave may, or may not, conspire again this season.

Comments Off on Is this hot start to summer unusual?