Did climate change kill the dinosaurs?

Posted on December 18, 2017 by WeatherGuys Editor 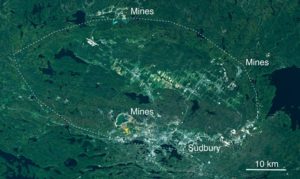 Landsat image of the Sudbury Basin in Ontario,
the remnants of an asteroid impact that
occurred ~1.8 billion years ago.  Credit: USGS.

Sixty-six million years ago, the age of the dinosaurs ended abruptly, coinciding with the extinction of about 75 percent of the total number of living species.

Evidence and climate modeling indicate that global wildfires resulted from a collision with a massive asteroid that could have lofted large amounts of soot into the atmosphere. The smoke would have plunged Earth into darkness for nearly two years, which would have shut down photosynthesis, drastically cooled the planet, and contributed to the mass extinctions as evidenced in the fossil record.

It is now an accepted scientific fact that objects from outer space can and do collide with planets. The collision of the Shoemaker-Levy comet with Jupiter in 1994 provided spectacular evidence that extraterrestrial objects can affect a planet’s atmosphere.

Depending on its exact location, a major asteroid impact on Earth and the debris ejected by the impact can cause extended darkness due to global fires, acid rain, ozone loss and even mile-high tsunamis.

In 1990, evidence was discovered of an impact with an asteroid that occurred about 66 million years ago near the Yucatán Peninsula. Named for a local village, the Chicxulub crater is a 112-mile-wide impact crater visible in gravity and magnetic field data. The crater size is consistent with a 6- to 12-mile-wide asteroid.

Remnants of the asteroid have been found in sediments worldwide, confirming its global influence. The Chicxulub impact was probably not a once-in-history event. There are indications in the fossil record of other extinction events that occur every 26 million years or so.

Scientists are coming to the realization that on very long time scales the history of Earth, including its climate, may be periodically upset by asteroid and comet impacts.

Comments Off on Did climate change kill the dinosaurs?