Does this cold wave prove the globe is not warming?

Posted on January 3, 2018 by WeatherGuys Editor

What had been a warmer than normal December, with the first 22 days averaging nearly 4.8 degrees above normal, was transformed to slightly below normal by a dramatic cold wave to end the month. 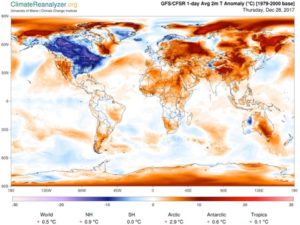 Over the last week of December we averaged about 11 degrees below normal. This sudden change, though not unprecedented, was foreseen in various medium-range forecasts made before Christmas. But it has captured the nation’s attention as 2017 draws to a close.

Unfortunately, some of that attention may contribute to misunderstanding — motivated by President Trump’s recent statement suggesting such a cold wave provides evidence that his administration’s denial of climate change has been vindicated. Defense of the reality of global warming is particularly challenged by the cherry-picking skeptic during winter, as any period of below-average temperatures, and every winter will have some, is construed as evidence to the contrary.

However, the facts are that December 2017 was the 15th-warmest of the past 70 Decembers and that the areal extent of Northern Hemispheric cold air poked barely above average for the first time all month just a couple of days ago. This is consistent with a systematic warming of the Northern Hemisphere winter over the past seven decades that is unequivocally a manifestation of increased CO² concentrations and the associated global warming.

Science extends our collective “senses” to provide evidence of the workings of the natural world. As leader of our great country, the president has an obligation to assess his skepticism in the face of empirical facts. To do less is to neglect the duties of his office.

Comments Off on Does this cold wave prove the globe is not warming?