Can weather satellites see the fires in California?

Posted on December 11, 2017 by WeatherGuys Editor 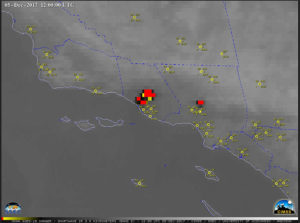 GOES-15 IR detection of California wildfires
on 12/5/17, from the CIMSS Satellite Blog.
(click to animate)

Sensitive instruments on some weather satellites can see the fires, but only at night. They do not see individual trees burning but they detect that a region is on fire. We can see the flames during the night because it’s dark and that increases contrast. During daytime, solar illumination reduces this contrast and thus detectability.

The instruments onboard satellites can detect byproducts of the fires 24 hours a day. For example, during the daytime, observations at wavelengths associated with the color blue can detect the smoke from the fires. They can pinpoint the origin of the smoke, and thus the fires.

Satellites can track the smoke as it is transported away from the fires. The smoke can be transported by the winds to the ground and become an air quality issue. In dense concentrations the smoke can have health impacts for those with asthma conditions.

The new geostationary satellites, ones that appear to be fixed above Earth, are used to detect and monitor the fires. Observations can be made every 30 seconds, which allows forecasters to track the direction the fire moves and also the intensity of the fire. This is very useful information in fighting the fires. Satellite measurements can also be used to estimate how much material is being consumed by the fires.

Once the fires are extinguished, satellites can measure the size of the burn scar. Over time we can observe how new vegetation grows into the burned area and the ecological recovery.

Comments Off on Can weather satellites see the fires in California?