Why should we be concerned about the Arctic climate?

Posted on October 7, 2019 by WeatherGuys Editor 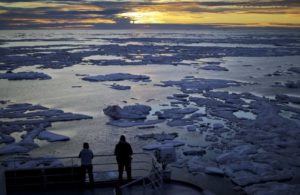 Researchers look out from the Finnish icebreaker MSV Nordica as the sun sets over sea ice in the Victoria Strait along the Northwest Passage in the Canadian Arctic Archipelago. The occasional extreme late-summer storm can be quite damaging to the ice. (Photo credit: David Goldman, Associated Press)

The year 2019 will go down as the second-lowest minimum extent of sea ice. Sea ice is bright and reflects about 80% of the sunlight that falls on it, helping to keep the surface cold.

When the sea ice melts, the ocean surface is exposed and absorbs incident solar energy. That leads to a warming of the water and the air above, which melts more ice, leading to increased warming and more melting.

Arctic sea ice is now less than half as thick as it was at this time of year in 1980.

The Arctic permafrost is thawing, releasing carbon and methane that has been frozen in the earth for millennia. Release of these two greenhouse gases into the atmosphere causes further warming. The ground can collapse when permafrost laced with ice melts, weakening structures built on the surface.

Global wind patterns are driven by the temperature difference between the equator and the polar regions.

The quicker warming of the Arctic reduces this temperature difference, which can change global wind patterns.

The melting of ice over Greenland reached historically high levels in 2019 when wind patterns transported warm air from Europe’s midsummer heat wave. The rapid melting removed the previous winter’s low snowfall and exposed older ice. The older ice is not as bright as the fresh snow and increases absorption of solar energy thereby increasing the melting.

The Greenland ice sheet is the world’s second-largest repository of freshwater. As the ice melts, it enters the oceans and can raise global sea levels. Current trends are heading to sea level rise of 6 to 12 inches worldwide this century.

Indigenous populations are also affected. The reduction of frozen areas affects the cultural practices of the Arctic peoples developed through their centuries-old finely honed relationship with the land, ocean and ecosystems.

Comments Off on Why should we be concerned about the Arctic climate?