What is the status of the ozone hole?

Posted on September 30, 2019 by WeatherGuys Editor 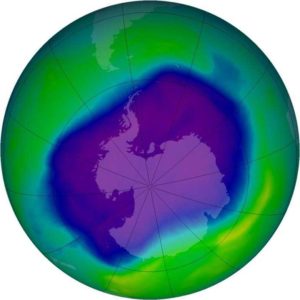 The ozone hole is a region where there is severe depletion of the layer of ozone — a form of oxygen — in the upper atmosphere that protects life on Earth by blocking the sun’s ultraviolet rays. (Image credit: NASA)

Ozone occurs about 18 miles above the Earth’s surface and is both caused by and provides protection from damaging ultraviolet energy emitted by the sun.

The development of an atmospheric “ozone layer” allowed life to move out of the oceans and onto land.

The ozone hole occurs high over the continent of Antarctica. It is the appearance of very low values of ozone in the stratosphere.

The winter atmosphere above Antarctica is very cold. The cold temperatures result in a temperature gradient between the South Pole and the Southern Hemisphere middle latitudes, causing strong westerly stratospheric winds that encircle the South Pole region.

PSCs begin to form during June, which is wintertime at the South Pole. Chemicals on the surface of the particles composing PSCs result in chemical reactions that remove the chlorine from the atmospheric compounds.

When the sun returns to the Antarctic stratosphere in the spring (our fall), sunlight splits the chlorine molecules into highly reactive chlorine atoms that rapidly deplete ozone. The depletion is so rapid that it has been termed a “hole in the ozone layer.”

The amount of ozone in the atmosphere is routinely measured from satellites. Typically, the Antarctic ozone hole has its largest area in early September and lowest values in late September to early October.

This year’s data reveal that the formation of the ozone hole came about two weeks early and is much smaller than in recent decades. This year, the polar vortex is unstable because the stratosphere has reached temperatures of up to 40 degrees above normal, preventing the formation of PSCs.

The global ban on chlorofluorocarbon, known commonly as the refrigerant Freon, will eventually lead to the removal of chlorine compounds from the stratosphere during the 21st century. In the absence of CFCs, the ozone layer will repair itself naturally.

The good news is that the size of the ozone hole is showing signs of shrinking.

Comments Off on What is the status of the ozone hole?