What is the status of Antarctica’s ice sheets?

Posted on January 15, 2019 by WeatherGuys Editor 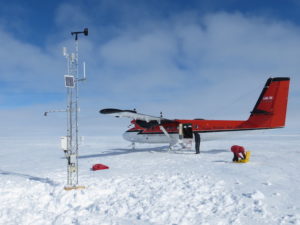 Most of Antarctica is covered by ice.

The ice sheet is over 2 miles thick in places and in some places the ice sheet bottom is almost a mile below sea level. This massive ice covers mountain ranges, and volcanoes exist underneath the sheets.

Antarctica drains more than 80 percent of its ice sheet through floating ice shelves. In recent years we have seen the collapse and melting of these ice shelves. In 2002, satellite imagery captured the collapse of the entire 1,250-square-mile Larsen B Ice Shelf. The disintegration of this Antarctic Peninsula ice sheet was rapid.

New observations indicate that glaciers in East Antarctic have begun to melt. Scientists have long considered these glaciers to be more stable than those in West Antarctica. Glaciers around the West Antarctic Ice Sheet are currently thinning. The Antarctic Peninsula Ice Sheet is changing most rapidly.

Comments Off on What is the status of Antarctica’s ice sheets?