Can weather in the stratosphere affect us near the ground?

Posted on January 7, 2019 by WeatherGuys Editor 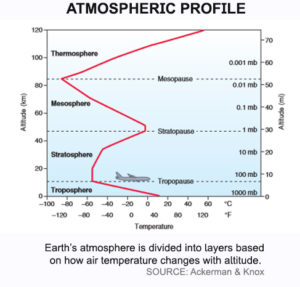 Thus far the winter has been relatively mild around the Northern Hemisphere. This December was the 14th-warmest December, and the period from Sept. 1 through Dec. 31 was the eighth-warmest since 1948.

Such a prolonged delay to the onset of winter makes one wonder if it will ever arrive this year. Though there is no clear way to be sure about the answer to that question, one potential phenomenon that can encourage a winter-like cold air outbreak is a sudden warming of the lower stratosphere, the layer of the atmosphere between 6 and 20 miles above the surface.

Every year, as the sun heads toward the horizon in polar regions at the autumnal equinox, a strong wind maximum develops on the edge of the cold, stratospheric air that is left in the expanding polar night. This jet is known as the polar night jet (PNJ). It is usually fairly east-west oriented with few undulations in it, and it provides dynamical support for containing cold air in the lower troposphere at high latitudes.

The PNJ can weaken rapidly when it is showered with wave energy that emanates from a parade of storms occurring in the underlying troposphere. Rapid weakening of the PNJ is often associated with lower stratospheric temperature increases of as much as 50 degrees in one day — sudden stratospheric warmings (SSWs).

With a weaker PNJ, the containment of cold polar air at lower altitudes is also weakened and so locations in the middle latitudes (where we live) are suddenly more susceptible to dramatic cold air outbreaks, often delayed by a few weeks from when the SSW occurs. At the turn of the new year, an SSW occurred and so some place in the Northern Hemisphere may be a couple of weeks away from a rude winter awakening.

Comments Off on Can weather in the stratosphere affect us near the ground?