What were the top weather events for 2018?

Posted on January 3, 2019 by WeatherGuys Editor 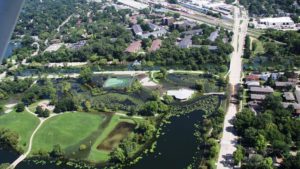 The Yahara River overflowed its banks on the east side of Madison in late August after the rainiest day ever recorded in the city. (Photo credit: Wisconsin Air Coordination Group and Wisconsin Drone Network)

The year began with frigid temperatures across Wisconsin. The average temperatures for the first seven days of January were well below normal across southern Wisconsin with most areas at least 15 degrees below normal.

The year-to-date temperature across the globe was more than 1 degree above the 20th-century average of 57.2 F. That may turn out to be the fourth-highest global mean temperature in the 139-year record,

Southern Wisconsin experienced a rainy summer. The August precipitation that fell over the region was about 200 percent of normal. Total precipitation was also above normal for June and July. By the end of summer, we were about 6 inches above normal.

On Aug. 19, 2.74 inches fell on Madison, setting a daily record rain amount, beating the old record of 2.13 inches set in 2007. In particular, August has been exceptionally rainy compared to the prior five Augusts as the only above-normal August in that stretch occurred in 2014 (+1.14 inches).

There were 17 confirmed tornadoes in Wisconsin on Aug. 28 with the strongest rated as EF-2 on the enhanced Fujita scale. Damage to trees and agriculture was widespread on that day, but there were no reported fatalities or injuries.

Comments Off on What were the top weather events for 2018?