Do April showers bring May flowers?

Posted on April 2, 2018 by WeatherGuys Editor 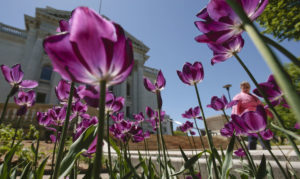 Do April showers bring May flowers?
For most plants the first flowering is more
tied to the temperature than to rain.
(Photo credit: State Journal archives)

George Latimer Apperson’s “Dictionary of Proverbs,” traces the phrase “April showers bring May flowers” to the late 1880s and may even go back to the early 15th century.

Weather forecasts based on weather wisdom in folklore are based on careful observations of nature and the skies and correlating those observations with weather events. Some sayings are grounded in atmospheric physics and some seem a bit silly.

In general, rain would have a positive effect on the abundance of flowers provided too much didn’t lead to flooding. A geographic region with a rainy season would certainly start plants to flower after a good soaking of the soil.

A long-term drought would have a negative impact on plants and when they flower. However, for most plants the first flowering is more tied to the temperature than to rain. The development of plants depends on the accumulation of heat.

This is consistent with the observations that the last frost has been occurring earlier in the year in Wisconsin. The change is not much for Dane County, but in northwestern Wisconsin, the last frost date now occurs about two weeks earlier than it did in 1950.

Should we change the saying to “Warm temperatures in March bring April flowers”?

It doesn’t have the same ring to it as the current, and thus is not likely to endure. The revised saying may also not be true as many plants need a dormant period of colder temperatures to thrive.

Comments Off on Do April showers bring May flowers?