Is there a net loss of water from the upper atmosphere?

Posted on October 16, 2017 by WeatherGuys Editor 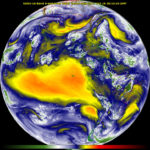 Our planet, along with all planets that have an atmosphere, lose gases to outer space.

Different processes drive this escape, and they operate at different time scales. One loss process is through molecular kinetic energy.

The kinetic energy and mass of a molecule determine its velocity. The more massive the molecule of a gas is, the lower the average velocity of molecules of that gas at a given temperature.

Therefore at the same temperature, it is less likely that heavier gases will reach escape velocity than lighter gases. Hydrogen will escape from an atmosphere more easily than carbon dioxide, which has more mass.

If the planet has a high mass, like Jupiter, the escape velocity is greater, and fewer particles will escape. Given Earth’s temperature and mass, our atmosphere does not lose a significant proportion of its atmosphere through molecules reaching escape velocities.

Stripping of the atmosphere by a solar wind is a process that can strip an atmosphere of its gases. Earth’s magnetic field helps to protect us from large losses by this process.

Comments Off on Is there a net loss of water from the upper atmosphere?