How does frost form?

Posted on October 9, 2017 by WeatherGuys Editor 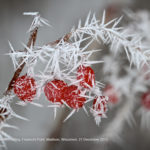 Frost on objects is just water vapor in the air that has deposited itself as ice onto a surface. Frost forms on objects close to the ground, such as blades of grass.

At night, a blade of grass loses energy by emitting radiation (a non-lethal kind) while it gains energy by absorbing the energy emitted from surrounding objects. Under clear nighttime skies, objects near the ground emit more radiation than they receive from the sky, and so a blade of grass cools as its energy losses are greater than its energy gains. If the temperature of a grass blade gets cold enough and there is sufficient water vapor in the environment, frost will form on the grass.

Overnight cooling of the air near the ground causes morning frost on grass and car windshields. Frost will form on a surface only where the temperature is at or below freezing. The observed air temperature may be higher than 32 degrees, since those air temperature observations are taken at about 4 feet above the ground, where it can be warmer than the ground.

Comments Off on How does frost form?