What does the State of the Climate Report tell us?

Posted on August 14, 2017 by WeatherGuys Editor 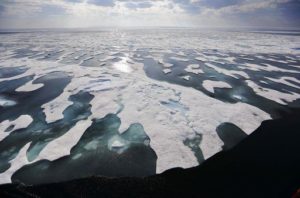 Sea ice melts on the Franklin Strait along the Northwest Passage in the Canadian Arctic Archipelago on July 22. Because of climate change, more sea ice is being lost each summer than is being replenished in winters. Less sea ice coverage also means that less sunlight will be reflected off the surface of the ocean in a process known as the albedo effect. The oceans will absorb more heat, further fueling global warming. (Photo credit: David Goldman, Associated Press)

The National Oceanic and Atmospheric Administration (NOAA) released its 27th annual State of the Climate report Thursday, and it was full of attention-grabbing news.

Topping the list was the fact that analysis of global temperature measurements revealed that 2016 bumped 2015 as the warmest year in 137 years of record keeping. In fact, 2016 was the third consecutive year of record warmth.

The report found that most indicators continue to portray a warming world. Concentrations of the major greenhouse gases carbon dioxide (CO2), methane (CH4) and nitrous oxide (NO2) rose to record levels in 2016 with CO2 averaging 402.9 ppm (parts per million – or molecules of CO2 per million molecules of atmospheric gas) for the year. This was the first time that the annual average was over 400 ppm — a level that is 33 percent higher than anything the Earth has seen in at least the last half million years.

Among a number of other high-profile measurements, the maximum Arctic sea ice extent (reached near the end of the winter in March 2016) tied the previous year’s record as the smallest in the 37-year satellite record. The minimum sea ice extent, reached at the end of summer in September 2016, tied for second lowest extent ever (with September 2007).

The climate system of Earth has so immense a reservoir of natural variability that three consecutive record-breaking warm years cannot be attributed merely to chance. Instead, these comprehensive measurements constitute a clear signal of ongoing climate change caused or influenced by human activities.

Our nation simply must rise to meet this challenge and must do so without delay.

Comments Off on What does the State of the Climate Report tell us?