Why is the sky blue?

Posted on August 25, 2017 by WeatherGuys Editor 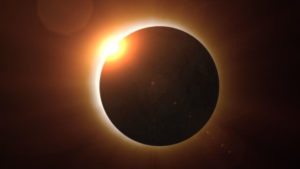 During a total eclipse, when the full sun is covered by the moon, we only see light on the horizon that is scattered in our direction. (Photo credit: NASA)

All the attention of today’s eclipse has raised interest in the sky’s color.

To understand why the sky is blue, we need to understand a little about light. Light is a form of electromagnetic energy. This form of energy does not need matter to propagate.

Particles that are tiny compared to the wavelength of the light scatter selectively according to wavelength. While all colors are scattered by air molecules, violet and blue are scattered most. The sky looks blue, not violet, because our eyes are more sensitive to blue light (the sun also emits more energy as blue light than as violet).

At sunset and sunrise, the sunlight passes through more atmosphere than during the day when the sun is higher in the sky. More atmosphere means more molecules to scatter the violet and blue light. If the path is long enough all of the blue and violet light gets redirected out of your line of sight, while much of the yellow, orange and red colors continue along the undeviated path between your eye and the sun. This is why sunsets often are composed of yellow, orange and red colors.

During a total eclipse, when the full sun is covered by the moon, we only see light that on the horizon that is scattered in our direction.

Comments Off on Why is the sky blue?