Is our growing season getting longer? 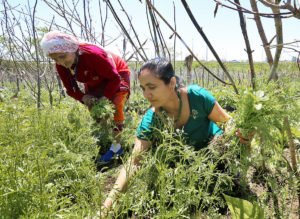 Yes. There are several studies that demonstrate shifts in the timing and length of the growing season.

The Growing Degree Days, or GDD, is a heat index that is related to plant development and is used to predict when a crop will reach maturity.

Each day’s GDD is calculated by subtracting a reference temperature, which varies with plant species, from the daily mean temperature, setting values less than zero to zero.

The development of plants depends on the accumulation of heat. Since cool season plants have a lower reference temperature, they accumulate GDDs faster than warm season plants.

When drought or pests do not overly stress plants, the summation of the GDD can be used to measure the accumulation of heat and thus predict when a crop will reach maturity.

GDDs can be computed using climatic temperatures of an area. With that computation, we can estimate good crops to grow in a given region, similar to plant hardy zones. The longer growing season and warmer temperatures results in a changing GDD that is favorable to warm season plants.

Comments Off on Is our growing season getting longer?