How does weather impact forest fires? 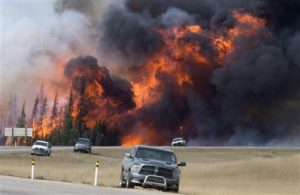 Fires require fuel to burn, heat to ignite and oxygen to feed the chemical reaction. Weather plays a key role in all of these requirements to start and spread a forest fire.

Weather and climate are important in making fuel available by determining the moisture content of the vegetation. A long period without rain dries out the vegetation, making it easier to burn and thus a better fuel source.

Low humidity makes it easier to start and spread a fire. Trees and shrubs wet from rains make it more difficult to start a fire.

Lightning from thunderstorms often starts a wild fire in remote areas. Hot days will warm and dry potential fuels, making the fire easier to start and increasing the rate at which it can spread.

Winds also play an important role in starting and spreading a fire by fanning the flames of the initial spark from a lightning bolt. The winds provide fresh oxygen that can also stir a fire that has died down. Winds help steer, along with fuel availability and topography, the direction and progress of a fire.

A large fire can generate a wind pattern of its own that can help to spread the fire. Rotating winds can develop along the edge of a hot fire. These vortices are a result of the contrast between the hot air associated with the fire edge and the cooler air over the adjacent, non-burning region.

The substantial influence that the fire has on the winds surrounding it makes the precise direction and speed of the spread of the fire difficult to forecast.

Comments Off on How does weather impact forest fires?