Posted on March 8, 2016 by WeatherGuys Editor 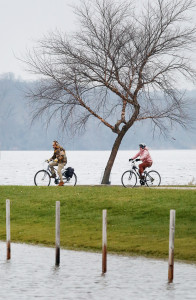 It may not surprise anyone that the average temperature from Dec. 1 to Feb. 29 this season in Madison was 5.67 degrees above normal, with most of that surplus accumulated during an extremely warm December that was 12 degrees above average.

There are other ways to assess the winter severity that are less local in nature. Four times each day we calculate the areal extent of air colder than minus 5 degrees Celsius at 1 mile above the surface using weather data supplied by the National Center for Environmental Prediction. Averaging the four measurements per day together creates a daily value of the areal extent of this “cold pool.”

Despite the fact that our last two winters were either normal (last year) or well below normal (2013-14) in Madison, around the entire Northern Hemisphere those winters set back-to-back records for the smallest average cold pool areas (warmest winters) in the last 67 years.

Though we did not set a record, this season’s cold pool was the seventh smallest on record. Six of those seven years have occurred since 2000-01 indicating a trend toward overall hemispheric winter warming. In fact, over the last 67 winter seasons, the 90-day December-January-February average areal extent of this low-level cold air has systematically decreased.

The best explanation for this long-term trend is that the Earth is warming as a result of changes in the chemical composition of the atmosphere induced by the burning of fossil fuels.