What is “sea smoke” and where is it usually seen?

Posted on February 29, 2016 by WeatherGuys Editor

We recently got a question from a reader who had heard the term “sea smoke” while traveling near Superior on a windy, cold winter day.

Amazingly, sea smoke has a very similar physical origin to the “fog” we often encounter as we take a shower. 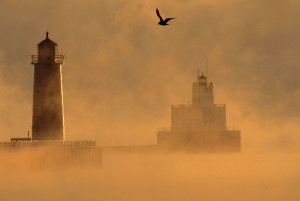 Fog is a cloud that develops directly above the surface of the Earth. Clouds are composed of tiny liquid water droplets whose diameters measure about 20 millionths of a meter. Invisible water vapor can condense into liquid water when the air containing the vapor becomes saturated.

Sea smoke arises from rapid addition of water vapor to the air, occasioned by really cold, dry air moving over an open body of relatively warm liquid water. In such a case, water vapor is added to the air through evaporation off of the liquid water surface.

So long as there is not very much ice on Lake Superior, the invasion of cold, dry air from Canada across the lake can readily produce this sea smoke.

If it is windy as well, which is usually the case, the sea smoke can be fashioned into dramatic, tornado-looking structures known as “steam devils.”

Apparently the bluffs on the north shore of Lake Superior at Duluth are a prime spot for viewing these fascinating natural wonders though one must be willing to endure pretty cold conditions to watch them.

Comments Off on What is “sea smoke” and where is it usually seen?