Will there be a White Christmas in Madison this year?

Posted on December 17, 2018 by WeatherGuys Editor 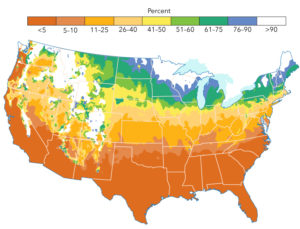 Climatological probability of a “White Christmas” across the contiguous United States.
(Data from NOAA)

In testimony to the infectious appeal of the famous scenes memorialized by Nathaniel Currier and James Ives, prolific lithographers of the middle 19th century, there is an enduring obsession with snow at Christmastime.

A so-called White Christmas is officially observed anytime there is 1 inch of snow on the ground on Christmas morning, whether or not it is snowing at the time.

On average, Madison experiences such a holiday only slightly more than 40 percent of the time. We have had memorably wintry Christmases in the relatively recent past, however. The morning low temperature on December 25, 2000, was a record -21 F with nearly 20 inches of snow on the ground, capping a remarkably snowy month of December that year.

On the other hand, on Christmas Day 1982 the temperature soared to a record high of 56 F with, of course, no snow except at the back door of ice rinks. The next year the minimum temperature on Dec. 25 was a balmy 45 F.

This year it is looking very unlikely that we will record a White Christmas. In fact, thus far in December, our climatologically snowiest month of the year, we have received 1 inch — well behind pace.

Meanwhile, places such as North Carolina and St. Louis have already received their first major storms of the year.

For those of us who are feeling the snow drought more acutely than others, there is some cause for hope. Medium range forecast models are currently suggesting the last week of December may be our first snowy week with a chance of light snow on more than a few of those days.

Comments Off on Will there be a White Christmas in Madison this year?