How are clouds named?

Posted on December 10, 2018 by WeatherGuys Editor 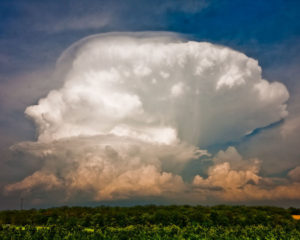 This uncommonly clear view of an entire thunderstorm cell, with the top of the growing cumulonimbus tower topping out at 40,000 feet, reveals many interesting features, including “fall streaks” of what may be hail from the underside of the overhanging anvil portion of the cloud. Shortly after this photo was taken on May 22, 2011, near Madison, the storm pelted the Sun Prairie area with large, damaging hail. (Photo credit: Grant Petty, faculty, Department of Atmospheric and Oceanic Sciences, Winner: 2012 Cool Science Image contest)

In 1803, British pharmacist and chemist Luke Howard devised a classification system for clouds. It has proved so successful that meteorologists have used Howard’s system ever since, with minor modifications.

According to his system, clouds are given Latin names corresponding to their appearance — layered or convective— and their altitude. Clouds are also categorized based on whether they are precipitating.

Layered clouds are much wider than they are tall. They generally have flat bases and tops and can extend from horizon to horizon. The Latin word stratus describes the layered cloud category.

Their altitude and their ability to create precipitation also classify clouds. The root word cirro (meaning “curl”) describes a high cloud that is usually composed of ice crystals which accounts for their wispy appearance. The Latin word alto (“high”) indicates a cloud in the middle of the troposphere that is below the high cirro-type clouds. The prefix or suffix nimbus (“rain”) denotes a cloud that is causing precipitation.

Using the combination of appearance, altitude and ability to make precipitation, a wide range of cloud types can be identified. The 10 basic cloud types are cirrus, cirrostratus, cirrocumulus, altostratus, altocumulus, cumulus, stratus, stratocumulus, nimbostratus and cumulonimbus.

Comments Off on How are clouds named?