Is this cold early spring unusual?

Posted on April 9, 2018 by WeatherGuys Editor 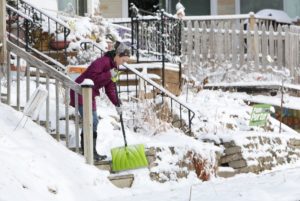 Carrie Hinterthuer shovels the steps of her East Side home on Wednesday. If we can manage two more days with snow in April, we will have placed ourselves in unusual meteorological territory — more days of snow in April than in March. (Photo credit: Amber Arnold, State Journal)

Conversely, of the 15 days with above-normal temperatures, the departure was never larger than 9 degrees. During the month of March we had five days on which snow fell, with measurable amounts occurring on only three of those days.

As everyone probably senses by now, a rather remarkable transition occurred at the start of April. Through the first six days of the month we have averaged 14.3 degrees below normal and the string of double-digit departures seems certain to last at least until Tuesday.

Even with a slight warm up to almost normal at the end of this week, we will still likely be more than 10 degrees below normal for the month by April 15. By the coming weekend, we will be plunged yet again into below normal temperatures for another few days.

In  addition to the cold, of course, we have dealt with accumulating snow on three days this month and a trace of snow on another. If we can manage two more days with snow in April, we will have placed ourselves in unusual meteorological territory — more days of snow in April than in March. Also worth noting is that in Madison the temperature has not reached 60 degrees since Dec. 4 — which strikes us as an unusually long streak though we have no easy access to the data required to verify that.

Nevertheless, among the many consequences of this prolonged cold at the start of spring is that when it finally does warm up that transition will seem very sudden and the seasonal warming is not likely to suffer a relapse.

Comments Off on Is this cold early spring unusual?