What was 2017 weather summary?

Posted on January 23, 2018 by WeatherGuys Editor 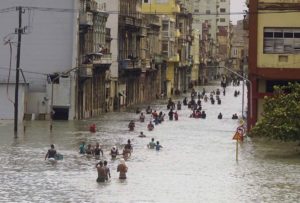 People move through flooded streets in Havana after the passage of Hurricane Irma in September. The 2017 season had the highest number of major hurricanes since 2005. (Photo credit: Ramon Espinosa, Associated Press)

The National Oceanic and Atmospheric Administration has completed its scientific analysis and the globally averaged surface temperature for 2017 was the third-highest since record keeping began in 1880.

The warmest year is 2016, and 2015 is the second warmest. Since 1977 global temperatures have been at least nominally above the 20th century average. The six warmest years on record have occurred since 2010.

Everyone has his or her own personal stories of top 2017 weather events. Chances are many will remember the cold weather at the end of December.

Temperatures were mostly above normal in the first two-thirds of December, particularly the week before Christmas. Then Arctic air pushed south across the region and extended all the way to the Gulf of Mexico in the last week of the year, bringing cold temperatures to southern Wisconsin. The cold outbreak was enough to make average December temperature in southern Wisconsin below normal by 2 to 3 degrees. A lake-effect snowfall dumped 66 inches in Erie, Pennsylvania, at the end of December.

At the end of the year, southern Wisconsin was 20 inches below normal in total snowfall. Yet the average annual Northern Hemisphere snow cover extent during 2017 was above the 1981-2010 average, the largest since 1985 and the eighth-largest in the 1968-2017 record.

Recent trends in the decline of Arctic sea ice extent continued in 2017. The average annual sea ice extent in the Arctic was approximately 4.01 million square miles, the second-smallest annual average in the 1979-2017 record.

On a warmer note, the summer average temperature for Wisconsin was about average, with summer precipitation above average.

Comments Off on What was 2017 weather summary?