Is there snow and ice on other planets?

Posted on January 16, 2018 by WeatherGuys Editor 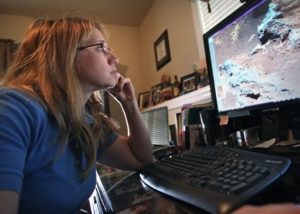 Becky Williams, science researcher with the Mars rover Curiosity project, examines imagery captured on the surface of the planet on a computer screen in the work office of her Waunakee home. The researcher was the lead author of an article in the journal Science regarding the team’s discovery of water evidence on the planet in 2013. (Photo credit: John Hart, State Journal Archives)

Like Earth, the north and south poles of Mars have ice caps that grow and shrink with Mars’ seasons.

Mars’ ice caps are made mainly of water ice, although Mars is cold enough to also have frozen carbon dioxide, or dry ice.

Carbon dioxide is in the Martian atmosphere and it freezes and falls to the surface of the planet as dry ice snow.

The Mars Reconnaissance Orbiter, or MRO, has observed pools of seemingly pure ice at the bottom of small meteorite craters. Radar observations of Mars have indicated that deposits of ice are buried below the surface.

Recently, the MRO has detected layers of ice in exposed cliffs poleward of 55 degrees north and south.

The banding structure in the cliffs suggests the deposits built up over many seasons and may provide clues to Mars’ past climate.

The Lunar Reconnaissance Orbiter has detected water ice in shadowy craters near the north and south poles of Earth’s moon. Enceladus, one of Saturn’s moons, has an icy surface and is the brightest moon in our solar system.

Below its icy surface is a heated ocean. Geysers shoot water from below out into space. The water freezes and falls back to the surface as snow.

Saturn’s smallest moon, Mimas, is a ball of almost pure water ice about 123 miles across.

Neptune’s largest moon, Triton, has geysers like Enceladus. These geysers are made up of nitrogen rather than water. This nitrogen freezes, covering Triton with ice made of frozen nitrogen.

Io, one of the many moons orbiting Jupiter, has “snowflakes” made out of sulfur.

Comments Off on Is there snow and ice on other planets?