Is winter winding down?

Posted on January 30, 2018 by WeatherGuys Editor 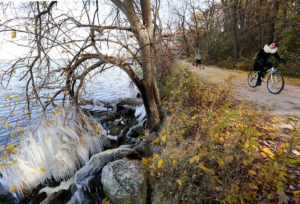 Ice accumulations formed by winds and sub-freezing temperatures hold to tree branches along the Lakeshore Path on the campus of UW-Madison in November. After mid-Feburary, it is rather unlikely we will experience another cold air event. (Photo credit:: John Hart, State Journal Archives)

Despite a prolonged deep freeze that straddled the end of December and the first week of January, during which we had below-zero morning low temperatures on 12 of 13 consecutive days, the month of January is likely to end at just about normal for Madison.

We are not, however, out of the woods just yet. Climatologically, the last week of January/first week of February is the coldest time of the year as a result of several physical factors.

First, the number of daylight hours at high latitudes in the Northern Hemisphere is very small – reaching its annual minimum on Dec. 21. For nearly a month, the increase in sunlight is very meager.

This means that very little input of solar energy is available in high latitude locations and nearly continual nighttime cooling prevails. Consequently, the generation of cold air masses is at its peak during this first four to six weeks of winter.

In line with these factors, Madison’s all-time lowest temperature, minus-37, was recorded on Jan. 30, 1951.

After the first week of February, however, the daily increase in daylight accelerates everywhere – this is even noticeable in Madison as the time of sunset is appreciably later by then.

As a result, it becomes more difficult to manufacture truly frigid air at high latitudes and this, in turn, greatly reduces our chances of an additional prolonged blast of arctic air.

So, even though the medium-range forecast suggests we will have another cold air event in the coming 10 days, take solace in the fact that it is rather unlikely that an additional such event will follow after mid-February. The cosmological and climatological decks are stacked against it.

Comments Off on Is winter winding down?