Do snowballs in Washington, D.C., count as evidence against global warming?

Posted on March 9, 2015 by WeatherGuys Editor 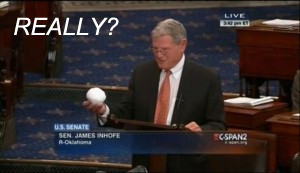 Last week, Sen. James Inhofe of Oklahoma, the current chairman of the Senate Environment and Public Works Committee, brought a snowball fashioned from accumulated snow in Washington, D.C., onto the floor of the United States Senate.

Inhofe used the snowball as proxy “evidence” of, in his words, the “hysteria on global warming.”

It is undeniable that the second half of this winter has been unusually cold over a large portion of North America, with an especially brutal combination of snow and cold over the eastern seaboard.

However, it is also true that this past winter (December/January/February) registered the smallest average areal extent of lower tropospheric cold air since records began in 1948. In fact, the past two winters, cold though they have been over North America, have set that record in back-to-back years.

This fact makes for interesting scientific work ahead. On the one hand, we hope to find an explanation of the hemispheric circulation anomalies that have led to this unusual North American cold in the midst of a warm hemisphere. At the same time, this set of circumstances makes the point that local weather and global scale climate change are not always in step with one another at a specific location.

Rather than appropriate unusual local weather conditions in a lazy and willfully unscientific argument about an important environmental issue, we encourage our public servants to examine the observations and the science surrounding them, ask difficult questions, and endeavor to seek the truth through careful analysis of the evidence.

Comments Off on Do snowballs in Washington, D.C., count as evidence against global warming?