Are there different types of snowfall?

Posted on March 2, 2015 by WeatherGuys Editor 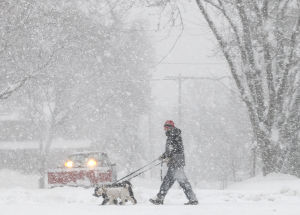 • A light shower of snow that does not last long and covers a small region is called a snow flurry.

• When large amounts of snow fall, then the event is colloquially referred to as a snowstorm, though the term “large” is not officially defined.

• A snowstorm that lasts for three or more hours with sustained wind speeds of at least 35 mph and visibilities less than a quarter-mile is called a blizzard.

• A snowstorm that includes any occurrence of thunder is called a thundersnow event.

• A storm with freezing rain is referred to as an ice storm.

• Diamond dust, also called “clear-sky precipitation” is a cloud composed of tiny ice crystals that forms near the ground.

A weather watch informs us that current atmospheric conditions are favorable for hazardous weather such as a blizzard, heavy snow or heavy freezing rain. When the hazardous weather is occurring or will soon occur in an area, then a warning is issued. Weather warnings are issued when the event is a threat to life and property.

An advisory is a less urgent statement than a warning and is issued to bring the public’s attention to a situation that may cause some inconvenience or difficulty for travelers or people who have to be outdoors.

Comments Off on Are there different types of snowfall?