How is the cold weather affecting citrus crops?

Posted on February 23, 2015 by WeatherGuys Editor 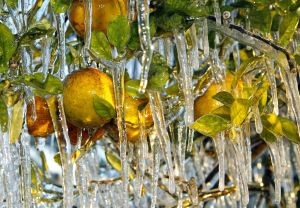 Last week was one of the coldest of the season in the southeast United States and such events have been known to present a substantial threat to the citrus industry in Florida.

The problem is that when the temperature gets below freezing, the fruit itself can freeze, rendering it substantially less valuable to the market.

How can citrus farmers combat the threat of cold on such nights? One of the most ingenious tricks they use takes advantage of the fact that phase changes of water involve substantial amounts of energy known as latent heats. Everyone knows that ice only melts into liquid water after some energy has been supplied to the ice – the latent heat of melting. In the process, the environment that surrounds the original ice becomes colder since it has been force to spend some energy to do the melting.

A classic, kitchen-ready example involves placing ice cubes in a glass of water. Two things happen — the ice melts and the original liquid water cools. The water cools because it has spent some of its energy in accomplishing the phase change.

The interesting thing is that if liquid water is converted to solid ice, the same amount of energy is released to the environment — this time it is called the latent heat of fusion.

So, when a freeze is forecast for a citrus farm, the farmers often spray the trees with liquid water. When the temperature drops, this water freezes and releases heat to its environment, some of which is the still ripening fruit. This heat is enough to preserve the fruit inside from freezing. So, paradoxically, causing ice to form on the fruit saves it from freezing.

Comments Off on How is the cold weather affecting citrus crops?