When does spring begin? 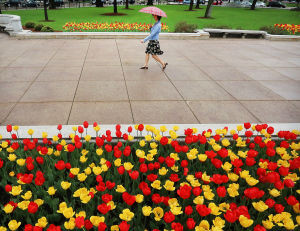 Spring marks the transition from winter to summer. Meteorologists often define the three months of spring as March through May. By that definition, spring would begin on March 1.

We might also define spring as the day on which, if there is precipitation, it is more likely to be in the form of rain than snow.

For southern Wisconsin, that occurs later in the month of March.

We may also define spring based on the appearance of a particular flower, the blooming of certain trees, or the return of specific migrating birds. These are the phenological signs of spring.

Some mark spring by the increase in the number of potholes.

According to the astronomical definition, spring occurs when the sun’s rays strike the equator at noon at an angle that is directly overhead.

This particular time varies from year to year due to variations in the Earth’s orbit about the Sun.

In the Northern Hemisphere the vernal (or spring) equinox (equi, “equal,” and nox, “night”) occurs sometime between March 19 and 23, but often on March 20 or 21.

This year, astronomical spring arrives on March 20 at around 5:45 p.m.

During the equinoxes all locations on Earth experience 12 hours of daylight and 12 hours of darkness. The sun rises due east and sets due west.

The seasons result from the tilt of the Earth and its yearly circling of the sun.

Whatever the definition, during spring the length of daylight hours is increasing and the air is warming.

That’s welcome news for many people, particularly after our cold February.

Comments Off on When does spring begin?