What is the best weather forecast model?

Posted on March 4, 2019 by WeatherGuys Editor 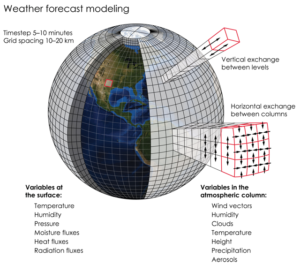 Numerical weather prediction models, or NWP, solve a complex set of mathematical equations that are based on the physics that drives how the air moves and how heat and moisture are exchanged throughout the atmosphere.

The two best-known NWP models are the National Weather Service’s Global Forecast System, or GFS, and the European Center for Medium-Range Weather Forecast, known as the ECMWF model. They are also known as the American and European models, respectively. Generally speaking, the European model has produced the most accurate global weather forecasts.

If physics drives these models, how can these NWP models result in different weather predictions? Because of the complexity of the mathematical equations, each model has to make some approximations, and these approximations may differ. In addition, each model assimilates observations a bit differently.

A numerical forecast is only as accurate as the observations that go into the forecast at the beginning of its run, also known as the “initial conditions.” Because weather moves from one place to another rapidly, tomorrow’s weather is influenced by today’s weather far upstream, and next week’s weather can be affected by today’s weather a continent away. For this reason, forecasters need lots of worldwide data. Today we have global sources of data of many different types to give the forecast the best possible start.

Comments Off on What is the best weather forecast model?