What does the recent cold and snow say about climate change?

Posted on November 26, 2018 by WeatherGuys Editor

It has been quite a week for discussion of global warming.

November has been remarkably cold this year for most of the eastern United States.

In Madison, as just one example, the monthly temperature through Friday has been 6.2 degrees Fahrenheit below normal for the month and, with the prospect of more cold to come, it appears the month will end well below normal.

President Donald Trump, taking note of the near-record cold that was expected for the Thanksgiving holiday, wondered, “Whatever happened to Global Warming?” 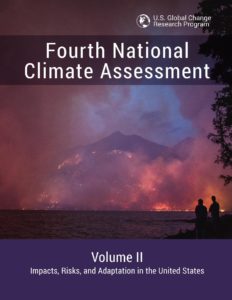 Then, on the day after the holiday, the National Climate Assessment, written before the hurricane season and the California wildfires, was released by the Trump Administration answering his question — it continues.

The report synthesizes more than 1,000 peer-reviewed studies regarding the state of the climate and our growing understanding of the issue.

Among the many important statements made in the report, it says that weather extremes associated with the warming climate “have already become more frequent, intense, widespread or of long duration.”

It also reports that over the last decade or so high impact weather has delivered nearly $400 billion dollars in damage to the country, far outpacing any prior records of destruction.

The bottom line is that scientists have reached solid conclusions regarding the threat that climate change poses to our nation, its infrastructure and the quality of life of our fellow citizens.

America has always risen to urgent challenges and met them with courage and eventual success. It is time we turned that indomitable resolve toward this existential problem.

Comments Off on What does the recent cold and snow say about climate change?