Posted on September 4, 2018 by WeatherGuys Editor 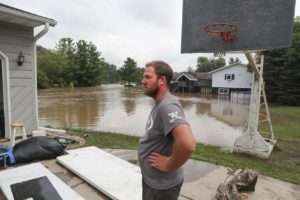 Tyler Statz takes a break from cleaning out his flooded home in Black Earth. The village and nearby towns were swamped when nearly 15 inches of rain fell in the area. (Photo credit: Steve Apps, State Journal)

The nearly unprecedented flooding that has plagued the southern half of the state over most of the last two weeks began with the incredibly heavy rains that fell on Dane County and surrounding areas in the afternoon and evening of Aug. 20.

Western parts of Middleton recorded over 12 inches of rain, and a staggering total of 14.7 inches fell in Cross Plains in well less than 24 hours.

The Cross Plains total now represents the single greatest 24-hour rainfall event in the state’s history, eclipsing the 11.72 inches that fell near Mellen on June 24, 1946.

A curious aspect of the heavy rain that night, at least in Madison (where 3.92 inches fell during the event), was that it was relatively lightning free as such summer downpours go. That observational characteristic is an important clue about the mechanisms that forced this state-record rain event.

Like the substantial rain that preceded it on Aug. 17, this precipitation was tied to passage of a mid-latitude cyclone that ingested extremely vapor-rich air into its circulation.

A week later, the devastating precipitation amounts were shifted northwest toward the La Crosse, Sparta and Viroqua area where, again, widespread heavy rain (near 12 inches in some locations) resulted in record flooding of the Kickapoo River.

The storms responsible for that flooding were more like the heavily precipitating convective storms we are used to here in the summer.

Comments Off on What caused last month’s flooding?