Why did the end of July have nice weather?

Posted on August 6, 2018 by WeatherGuys Editor 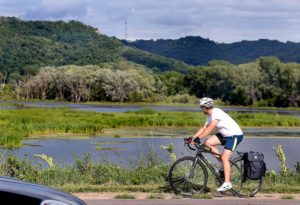 A bicyclist enjoys relatively cool weather while viewing the backdrop of the La Crosse River Marsh and the bluffs beyond while riding along Lang Drive on July 26. The cooler temperatures across Wisconsin and much of the Midwest in the last week of July resulted from a Canadian high-pressure system that settled over the central U.S. (Photo credit: Peter Thomson, La Crosse Tribune)

During the last week of July — the 25th through 31st — the temperatures across Wisconsin were 1 to 4 degrees below normal. In fact, much of the Midwest was cooler than normal.

The cooler temperatures resulted from a Canadian high-pressure system that settled over the central U.S. during that final week of July.

The Canadian high-pressure is a semi-permanent atmospheric high-pressure system that is associated with generally low temperatures over northern Canada. The Canadian Rockies keep the relatively warm air over the Pacific Ocean from warming Central Canada and the air masses that form there.

In winter the Canadian high consists of cold dense air, and extends only about 2 miles above the surface. When the system moves southeastward in winter, it can bring frigid air to the Midwest. In summer, it provides refreshing cool dry air to our region.

High-pressure systems have sinking air above that inhibits rain clouds from developing. Large areas of southern Wisconsin had less than half the normal amount of rainfall for this time of year. The sinking motions also lower the humidity. High pressures are accompanied by light winds.

The Canadian high-pressure system is generally associated with nice weather in summer. Other high pressure systems, particularly those that form over the Gulf of Mexico and move northward, can be accompanied by high humidity and pose a threat if the heat index is high.

Comments Off on Why did the end of July have nice weather?