Has this April set any records? 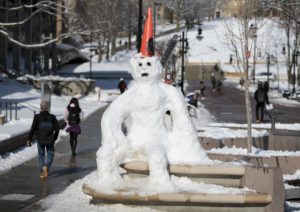 A fitting climax to a remarkable first two-thirds of April occurred last Wednesday as we received 7.2 inches of snow in Madison, more than doubling the previous daily record for snowfall (3.4 inches in 1912) on April 18.

Though there are too many remarkable aspects of this event to detail here, mention of a few of them is certainly warranted. First of all, the first two-thirds of the month have left us 12.8 degrees below normal for the month — the coldest first 20 days of April ever in Madison.

Second, Wednesday’s heavy snow was forecast well in advance. In fact, as the nearly 2 inches that fell on April 15 was winding down, most people in the area knew that a more substantial snow was on the way for Wednesday. Dawn on Wednesday was crystal clear, the kind of morning that a couple of decades ago would have immediately inspired hopes that the forecast for the coming snow would be in error. That is simply not usually the case in the current era.

Even disturbances of relatively small scale like the one that dropped the snow on Wednesday are quite often very accurately forecast by the present generation of sophisticated computer prediction models. The snow started around 11 a.m. and ended in the early evening, nearly precisely as forecast.

Third, the following two days with their bright, late April sunshine provided us with an additional rare spectacle — rapid melting of a deep snow layer. By the end of the day Thursday, a good deal of snow had disappeared in the face of the sunshine. By Friday night, only shady spots still had any trace of the record snow that had fallen just two days before.

And we had a chance today to tie the all-time record for latest calendar day on which 60 degrees is first reached, set in 1904 on April 23. Through Saturday, we had not seen 60 degrees since Dec. 4, with Monday’s forecast calling for a high of 62. But on Sunday it hit 62.

Comments Off on Has this April set any records?