Is severe weather season about to begin?

Posted on February 26, 2018 by WeatherGuys Editor

As the threat of winter snows recedes across the country, it is replaced by the threat of severe weather (i.e., thunderstorms with hail, damaging winds and tornadoes.) 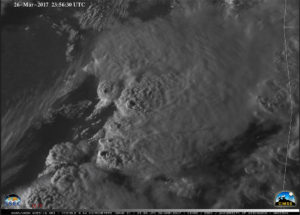 The severe weather season, though broadly spanning March through August across the United States, is actually quite regional. It begins in March in the Southern states, moves to the southern Plains during April and May, and then heads further north toward the Great Lakes states during the summer. One of the basic underlying reasons for this northward migration of the severe weather threat during the spring and summer is the fact that the jet stream follows a similar seasonal cycle.

The jet stream is a ribbon of high wind speeds located near the top of the troposphere (some six miles above the surface of the Earth). The jet stream position is strongly tied to the southern edge of the dome of cold air that is centered on the North Pole. During the depths of winter, that cold dome expands considerably, extending nearly to the Gulf of Mexico. As the winter ends and spring approaches, the hemisphere begins to warm up and the cold dome shrinks dramatically. Its southern edge moves to central Canada by early summer.

The jet stream is associated with vigorous vertical circulations (upward and downward motions). The upward vertical motions are instrumental in producing thunderstorms. Thus, when the jet stream migrates north as the weather warms in spring and summer, so does the greatest concentration of severe weather outbreaks.

Comments Off on Is severe weather season about to begin?