What is an ice fog?

Posted on February 19, 2018 by WeatherGuys Editor 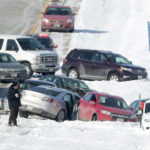 Each year about 700 fatalities occur in the United States as a result of traffic accidents during fog. A combination of high speed and low visibility is often to blame.

A small patch of fog contributed to a fatal multi-car pileup near Verona Wisconsin on February 12. 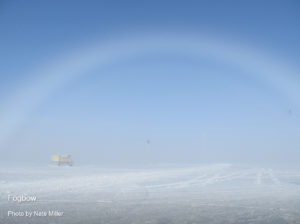 Fog is a cloud in contact with the ground. When the relative humidity approaches 100 percent, water vapor condenses on tiny particles suspended in the air to form a suspension of small water drops. The air in contact with the ground can reach high humidity if it cools or when water from the surface evaporates into it. Either of these processes increases the relative humidity of the air.

More common than an ice fog is a freezing fog. A freezing fog occurs when liquid fog droplets freeze to surfaces, forming white soft or hard rime. If there is a very light wind on a day with freezing fog, the wind can blow the droplets in one particular direction. As a result, small spikes of ice can grow into the wind on objects like trees and fences.The freezing fog can make roadways very slippery and dangerous. The danger is compounded by the poor visibility that accompanies the fog.

Comments Off on What is an ice fog?