What is a derecho? 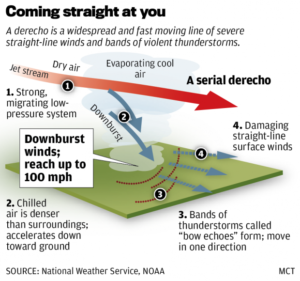 A derecho (pronounced deh-RAY-cho, a Spanish word meaning “straight ahead”) is an hours-long windstorm associated with a line of severe thunderstorms.

It is a result of straight-line winds, not the rotary winds of a tornado — hence its name. Derechos in the United States are most common in the late spring and summer (May through August).

The extreme winds of a derecho — up to 150 mph in the strongest storms — come about in the following way. Derechos are often associated with a quasi-stationary front in mid-summer. If the atmosphere just north of the front is very unstable, the front may trigger rapidly developing thunderstorms. A line of thunderstorms that forms in the vicinity of the stationary front can, via its cold downdrafts, drag down high-speed air from above. This can cause the high winds of a derecho.

At the same time, the high winds push the line of thunderstorms outward, causing it to bend or “bow.” This results in a bow echo image on weather radar. Once they get going, derechos can cover lots of territory — up to 1,000 miles.

Derechos leave significant property damage in their wake, even flattening entire forests. In some cases, derechos wreak as much havoc as a hurricane or tornado.

The June 29, 2012, derecho swept across from U.S. from west of Chicago to the East Coast, leaving as many as 5 million households without power. The storm traveled at speeds of more than 60 mph, with wind gusts approaching 80 mph. At least 22 people were killed.

About 40 percent of all thunderstorm-related injuries and deaths occur because of derechos.

Comments Off on What is a derecho?