Was the whole autumn unusually warm, or just November?

Posted on December 5, 2016 by WeatherGuys Editor 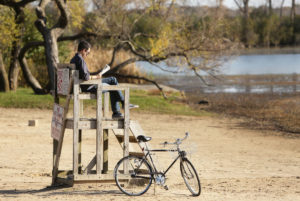 Alvaro Ceballos enjoys November’s mild weather as he stops to read at Vilas Beach on Lake Wingra on his way home from getting a haircut. Madison averaged 7.6 degrees above normal for the month, which ranked as the third warmest November on record. (Photo credit: Amber Arnold, State Journal)

If you thought November was warmer than usual around southern Wisconsin, you were exactly right.

Madison averaged 7.6 degrees above normal for the month, which ranked as the third warmest November on record (since 1870).

The warmest November here occurred in 2001, when the average temperature was 9.8 degrees above normal.

For the entire autumn season, defined as Sept. 1 through Nov. 30, Madison averaged 54.5 degrees, placing it behind only 1931 (56 degrees) as the second-warmest autumn on record.

Perhaps even more interesting is the fact that in Madison, which has a continuous 146-year temperature record, nine of the warmest 25 Novembers have occurred since 1994.

If, despite the fact that variation in November and autumn average temperature occurs, there were no discernible trend, these warmest Novembers would be distributed nearly equally throughout the 146-year record. Therefore, we could reasonably expect one such unusual November every six years or so.

Thus, to have had nine of them (54 years worth) in the last 22 years is far ahead of the expected pace. In a similar fashion, we should have expected to wait about 41 years to have experienced seven of the warmest 25 autumns but it has only taken 22 years.

These facts strongly suggest that the high frequency of warm Novembers and warm autumns since 1994 is not a result of random chance.

It appears instead to be a manifestation of the general warming of the planet associated with global climate change.

Comments Off on Was the whole autumn unusually warm, or just November?