When will the first snow arrive?

Posted on October 19, 2016 by WeatherGuys Editor 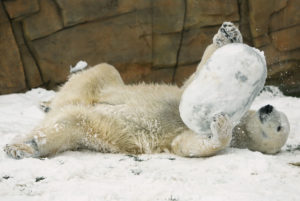 Sakari the polar bear frolics in his first snowfall in the Arctic Passsage exhibit at the Vilas Zoo on Nov. 21, 2015. We have now entered the season in which snow is possible, but it isn’t until Nov. 15 that the chances that precipitation will be snow is equal to the chances it will be rain. (Photo credit: Amber Arnold, State Journal)

The first cold mornings of the season visited southern Wisconsin last week with the morning low temperatures dipping to 34 and 33 degrees on Thursday and Friday mornings, respectively.

The first chill of the year has the tendency to turn our attention to the prospects of snow and when it might first arrive in Madison.

Over the last 36 years, the earliest measurable snow has fallen between Oct. 11 and 20, according to the Midwestern Regional Climate Center in Champaign, Illinois. Clearly that means we have now entered the season in which snow is possible.

However, as we have mentioned in a prior column, it is not until Nov. 15 that the chances that precipitation will be snow is finally equal to the chances that it will be rain. Consequently, the snow threat becomes substantial only after the middle of November.

In the same 36-year period, Madison has had to sometimes wait until the week of Christmas to receive its first measurable snow. So, a common but difficult-to-answer question arises — what can we expect this year?

The current 90-day outlook from the Climate Prediction Center points to Wisconsin being slightly warmer than normal but with about normal precipitation through the end of December.

These outlooks are based largely on statistical analyses and are thus not comparable in methodology, or in accuracy, to the short-term weather forecasts provided by the National Weather Service. Right now there is no physical reason to suspect a snowier or less snowy winter than average.

It can be said, however, that since last year’s total of 33 inches and 2014-15’s total of 32 inches were quite below normal, even if this year is only normal it will the snowiest in three years.

Comments Off on When will the first snow arrive?