Why are there different types of precipitation? 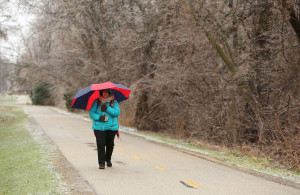 Tuyet Cullen shields herself from the sleet on Thursday as she takes the path along Atwood Avenue to a friend’s house. (Photo credit: Amber Arnold, State Journal)

When particles fall from clouds and reach the surface as precipitation, they do so primarily as rain, snow, freezing rain or sleet.

The main difference between these different types of precipitation is the temperature variations between the cloud base and the ground. Last week, Madison experienced all four of these precipitation types.

Almost all precipitation particles that fall in Madison begin as ice particles. If the particles completely melt, they reach the ground as raindrops. If they remain frozen, we have snowfall.

Ice storms occur when particles falling from the cloud melt and then fall through a layer of below-freezing air near the ground. The two precipitation types most common during ice storms are freezing rain and sleet.

Freezing rain forms when a very thin layer of cold air near the surface causes melted precipitation (raindrops) to become supercooled – a condition in which the drops remain in the liquid state even though the temperature of the liquid is below freezing. Such supercooled raindrops then freeze on contact with exposed objects on the ground. Freezing rain covers everything in a sheet of ice, creating shimmering landscapes.

Sleet consists of translucent balls of ice that are frozen raindrops. It occurs when the layer of subfreezing air near the surface is deeper — deep enough for the freshly melted raindrop to refreeze before reaching the surface.

When sleet hits the surface, it bounces and does not coat objects with a sheet of ice, as freezing rain does. Instead, it covers flat surfaces such as roads and driveways like millions of icy ball bearings.

Comments Off on Why are there different types of precipitation?