Was the Blizzard of 2016 forecasted well in advance?

Posted on January 27, 2016 by WeatherGuys Editor 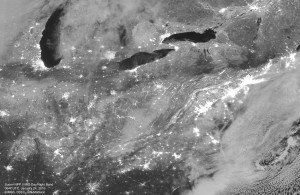 A wide corridor of snow can be seen in this stunning nighttime view of the U.S. east coast in the wake of the winter storm from Suomi NPP VIIRS Day/Night Band at 0647 UTC, 24 Jan 2016, courtesy of CIMSS/SSEC at UW-Madison

The blizzard that affected over 80 million Americans from the Deep South to New England over the weekend was a historic storm in many ways.

Perhaps most obviously, the snowfall totals that it delivered in the so-called Megalopolis (the stretch of cities from Washington, D.C., northeast to Boston) equaled or surpassed records in many locations.

Other locations that don’t often see large snowfall totals — such as eastern Kentucky, which received more than 15 inches of snow — were also hammered by this storm. Additionally, Weather Storm Jonas was the largest snowstorm on record for Harrisburg, Pennsylvania and Baltimore, Maryland and at JFK Airport in New York City.

The fact that the storm was so accurately predicted many days in advance is also noteworthy. Though not the first such accurate forecast in history, it is a high-profile example of the quiet revolution in weather forecasting that has taken place over the last 30 or so years.

The combination of increased observing capabilities (much of that increase in the form of satellite data), increased understanding of the physical processes that produce the weather, and increased computing power has greatly improved the weather prediction enterprise that now informs so much of our decision making in advance of, and in the face of, such extreme weather emergencies.

Such forecasts are the fruits of sustained commitment and investment in basic research in satellite meteorology (of which UW-Madison is both the originator and the world leader), dynamic meteorology and computer technology provided by research grants over decades.

Comments Off on Was the Blizzard of 2016 forecasted well in advance?