Are hurricanes in January typical occurrences?

Posted on January 19, 2016 by WeatherGuys Editor 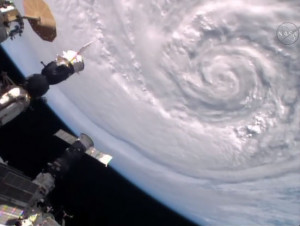 This photo, taken from video provided by NASA on Friday, shows Hurricane Alex seen from the International Space Station. The rare January hurricane in the Atlantic closed in on the Azores on Friday with authorities in the Portuguese islands warning of waves up to 60 feet high, wind gusts up to 100 mph and torrential rain.

While rare, there have been other hurricanes in the month of January. This is the fourth storm since record keeping started in 1851. Before Alex, the most recent January hurricane, Alice, was in 1955. Another unique aspect of Alice was that it formed on Dec. 30, 1954 and lasted until Jan. 6, 1955.

Why are January hurricanes rare?

Hurricanes form over warm waters. The evaporation of the warm ocean waters condenses to form clouds and precipitation releasing latent heat energy that helps to maintain the storm. A general rule of thumb is that hurricanes will not form unless the water temperature is at least 80 degrees.

Alex formed over waters whose temperatures were about 68 degrees, certainly below our rule of thumb. But, about 6 miles above, the air was very cold, at minus 76. The 144-degree difference between the air and water temperature, along with small vertical wind shear, helped the storm to develop into a hurricane.

Unfortunately, this early storm does not allow us to make a forecast about the upcoming season.

Comments Off on Are hurricanes in January typical occurrences?