Are thunderstorms dangerous to aircraft?

Posted on August 17, 2015 by WeatherGuys Editor 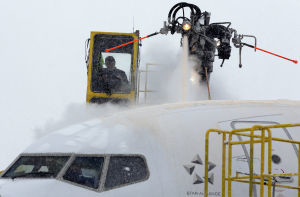 Crews work to de-ice a plane at O’Hare International Airport in Chicago on Feb. 1, when a snowstorm forced the cancellation of about 2,000 flights in the Midwest, most of them at O’Hare. Ice on the wings can disrupt the lift of the plane causing it to lose altitude.

On Aug. 7, an Airbus A320 carrying 138 people encountered hail within a rapidly developing thunderstorm that could not be avoided. No one was injured although the pilot made an emergency landing at Denver airport and the nose of the plane suffered hail damage.

Turbulence is also a danger to high-flying jets. Turbulence generated by a thunderstorm can cause the aircraft to violently shake even if only flying close to a storm. Lightning can strike a plane, but generally doesn’t do damage as the bolt enters the aircraft extremities, such as the nose, tail or wing tips.

Icing is particularly dangerous to planes. When the plane is flying in temperatures below freezing while inside a cloud, very cold liquid water drops freeze onto the aircraft as soon as they strike the plane. Ice on the wings can disrupt the lift of the plane, causing it to lose altitude.

The downdrafts of a storm can be very dangerous to aircraft on take-off or landing. A downdraft can result in rapid wind shift from a tail wind to a head wind causing the aircraft to rapidly lose altitude. Fortunately, airports are equipped with instruments that can detect hazardous conditions and send warnings that keep the planes from encountering these dangerous conditions.

Comments Off on Are thunderstorms dangerous to aircraft?