When did computer-based weather forecasts begin? 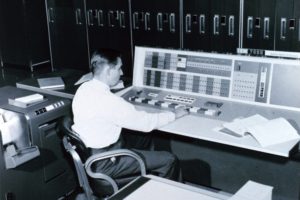 Just over a week past our extraordinary late season snow on April 27, it is worth considering how remarkable it is that such an unusual event can be so well forecasted several days in advance.

The drive to use computer models for weather forecasting had its origins in the immediate aftermath of World War II, initiated at a secret meeting at U.S. Weather Bureau headquarters on the rainy morning of Jan. 6, 1946.

After a series of successes and setbacks that mostly discouraged the broad meteorological community, the first operational computer-generated forecasts were issued on the afternoon of May 6, 1955. Thus, in less than 10 years the notion of a computer-based forecast went from dream to reality.

In the intervening 64 years, the combination of increased theoretical understanding both of meteorology and computational science, increased observational capacity — a good deal of which stems from satellite data — and sheer hard work on the part of a legion of dedicated scientists has resulted in our current forecasting capability.

The fact that our ubiquitous smartphones give everyone access to quite reasonable forecasts several days in advance is the end result of what might be considered the greatest scientific advance of the second half of the 20th century.

It is likely that had our late season snow come in April 1947, or even 1977, we would have been caught unpleasantly by surprise. Luckily, thanks to longstanding commitments to investment in basic scientific research, we are in a much better position today.

So, as you consult your phone for the forecast, remember that the first baby steps in numerical weather prediction were taken 64 years ago this May.

Comments Off on When did computer-based weather forecasts begin?