Why is ice different colors?

Posted on February 25, 2019 by WeatherGuys Editor 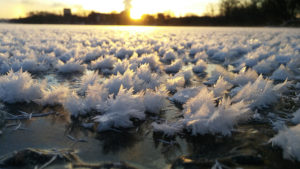 In both of these cases, the ice is not actually black but is transparent and therefore shows the color of the underlying surface.

When ice is clear, it’s because no air bubbles have been trapped in it. Lots of trapped air makes an object look white. You may have noticed that your ice cubes usually look cloudy and opaque in the middle. The water from your faucet has dissolved gases and minerals in it.

As ice forms, the process of freezing excludes impurities in the water from becoming part of the ice structure. In an ice cube tray, the water freezes from the outside and moves inward, and so the impurities are pushed into the middle of the ice cube and get trapped there — making it look cloudy in the middle. Snow looks white because of air trapped between crystals.

Lakes freeze from the surface downward. If a lake freezes slowly, the impurities and gases are pushed into the water below, resulting in clear ice.

The danger of driving on a road covered with black ice is that the roadway can appear to be merely wet. Drivers may not recognize the slippery conditions until it is too late and their cars begin to skid.

If your car has a thermometer, its temperature reading can help you determine hazardous road conditions. If your car’s thermometer measures an air temperature near freezing you should be wary of the road conditions. Because bridges span the open air, they cool faster than the roadways around them. Black ice may first occur on bridges; hence the warning signs “Bridge May Freeze Before Road.”

If a sidewalk is covered with clear ice, it may look dark gray — like a wet sidewalk. This “gray ice” can be hazardous to walking.

Comments Off on Why is ice different colors?