Is there energy in snow?

Posted on February 18, 2019 by WeatherGuys Editor 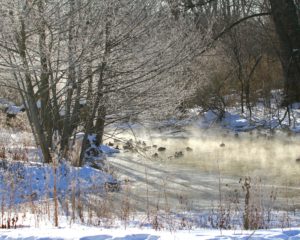 Since the beginning of this year, Madison and Dane County have received about 35 inches of snow.

Snow is a form of solid water and water is the only substance that occurs naturally in all three phases — solid, liquid and invisible gas — in the Earth’s atmosphere. Of course, that means that the 35 inches of snow began as the equivalent amount of water in the invisible vapor (gas) phase before it was transformed into solid water.

Since we know the depth of liquid-equivalent precipitation involved in delivering us 35 inches of snow since Jan. 1, the area of Dane County, and the latent heats of condensation and fusion, we can calculate how much energy has been released to the atmosphere in the production of that much snow.

Without providing the details of the calculation, we can report that the amount of energy involved could power the entire Madison metro area for about 7.7 years. Clearly, there are huge amounts of energy involved.

Comments Off on Is there energy in snow?