Did weather forecasting play a role in D-Day? 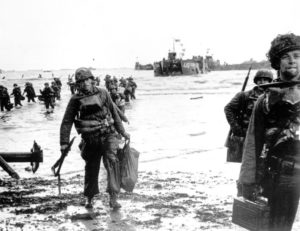 Had the Allies delayed the D-Day invasion of Europe that began June 6, 1944 with the landings on the beaches at Normandy, the combination of lunar cycle, tides and weather almost certainly would have postponed the invasion for more than a month likely costing the effort the tremendous advantage of secrecy. (Photo Credit: Associated Press Archives)

Wednesday was the 74th anniversary of the Allied invasion of Europe that began with the landings on the beaches at Normandy.

The combined land, air and sea assault of June 6, 1944, remains the largest such event in history. The success of the invasion was extraordinarily dependent on weather conditions.

More than three months before the invasion, a combined British and American forecasting team began rigorous forecast exercises designed to iron out the physical and logistical kinks of such a coordinated effort.

As June drew near, the nature of this collaboration was still problematic as the two groups employed vastly different methods in fashioning the requisite three- to five-day forecasts. The British were attempting to make such forecasts based upon the understanding of atmospheric dynamics that had grown substantially during the war. The Americans were employing a method based on a statistically based search through old weather data for historical analogues that could be used to guide the forecast.

To maintain secrecy, a large portion of the Allied fleet was squirreled far away in northern Scotland. Consequently, five days of lead time was required to mobilize these forces. Thus, Gen, Dwight D. Eisenhower needed to know by May 31 whether the first week of June, the prospective target for the invasion, would provide favorable weather.

The forecasters foresaw a break in that year’s unusually stormy late spring and suggested June 5 would work. As the day approached, the team realized that a one-day postponement would offer better conditions, prompting Eisenhower to make the fateful decision to invade on June 6, under barely acceptable conditions.

Had the Allies delayed, the combination of lunar cycle, tides and weather almost certainly would have postponed the invasion for more than a month — likely costing the effort the tremendous advantage of secrecy.

Comments Off on Did weather forecasting play a role in D-Day?