Will the recent volcanic eruptions in Hawaii lead to a change in global weather patterns? 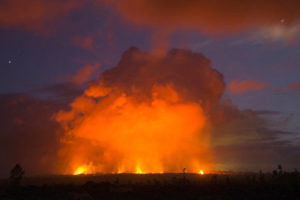 While the recent Hawaiian eruptions are impacting the weather and air quality of the immediate area, they are not likely to have a global impact nor to affect Wisconsin’s weather.

The reason is that the ash cloud debris, while reaching 30,000 feet, has remained in the troposphere, the layer where local weather occurs. To have a global impact, the volcano must eject debris into the stratosphere. There it can last for a couple of years and spread over the entire globe. By the ash reaching only into the troposphere, it can stay airborne for no more than a week due to precipitation processes, wind and gravity.

If volcanic eruptions that reach the stratosphere contain sulfur dioxide gas, they can have an important global impact. The gas can react chemically in the stratosphere to form tiny sulfuric acid droplets. These droplets can reside in the stratosphere for a few years and cause a cooling of global surface temperatures because they reflect solar energy back into space. This was the case with Mount Pinatubo in 1992, which lowered the global temperature about 1 degree over a two-year period.

Volcanic eruptions can lead to cooler temperatures in the mountain’s vicinity because of ash in the atmosphere. The amount of solar energy reaching the surface can be reduced by the ash plume, just like a cloud would do, resulting in a cooler temperature.

Comments Off on Will the recent volcanic eruptions in Hawaii lead to a change in global weather patterns?